The latest Auto Theft Statistics for 2014

We recently published a fun post about the top 10 insurance myths people tend to believe, and one of those myths had to do with vehicle theft. That's when it hit us, we've never done a proper post about auto theft statistics.

As insurance agents selling auto insurance, this is a critical piece of information we should be sharing with our readers, customers, and friends. It also provided a great reason to use that awesome photo of the new 2015 Ford Mustang!

This won't happen again, starting with this post, we will publish an annual auto theft statistics report.

National crime statistics are compiled and published by the Federal Bureau of Investigation (FBI), much of this data is directly from their annual report. 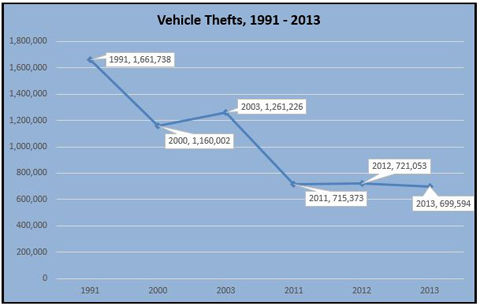 Because the rate of vehicle theft is declining each year, people don't suffer much anxiety that their vehicle will be stolen. This sentiment was corroborated by a Gallop Poll conducted in 2014 where 56% of those survey don't worry about auto theft.

Much of the reduction in auto theft is due to law enforcement efforts, and local and federal efforts to combat auto theft, as well as technology and insurance company supported organizations like the National Insurance Crime Bureau (NICB).

Even though the rate of vehicle thefts has been declining, the total value in stolen property is still extremely high. In 2014 the value of all stolen vehicles was in excess of $4.5 billion. This means vehicle theft is still a big business in the United States. Typically, it's our insurance companies that bear this expense, so auto theft is certainly a contributor to your insurance premiums paid.

Here are some useful (fun) facts about auto theft ins the United States:

The cities with the highest theft rates

According to a National Insurance Crime Bureau (NICB) study released in June 2015, the following cities have the highest rate per 100,000 inhabitants for vehicle thefts. for 2014. For those of us who live in California, and those who sell California auto insurance, it's noteworthy that seven (7) of the top 10 cities for motor vehicle theft were in sunny California.

Vehicle Thefts by Make or Model

The National Insurance Crime Bureau (NICB) reports that the Honda Accord was the most frequently stolen passenger vehicle in 2014, with 51,290 thefts. The Honda Civic ranked second, with 43,936 thefts. I guess Honda is popular with consumers and thieves alike.

If you drive an older Honda, you're more likely to have your vehicle stolen. The NICB notes that older Honda Accords and Civics account for most of these thefts, while newer Hondas are rarely stolen, due to improved anti-theft technology.

(1) Includes all model years for each vehicle.

Of the new model year vehicles, those that are stolen less frequently, there are still clear targets. Some of it has to do with the fact that there are just more of these types of vehicles, for instance, the Ford F-150 and Toyota Camry are two of the most popular models sold year-over-year.

The following chart shows the top ten model year 2013 vehicles that were most frequently stolen in calendar year 2013.

TOP 10 STATES WITH THE MOST AND THE FEWEST NUMBER OF MOTOR VEHICLE THEFTS, 2014

The history of enforcement of anti-theft laws?

The National Insurance Crime Bureau (NICB) combats auto theft by investigating cases referred to it by insurers and through its online databases. The databases allow member insurance companies to search files by driver identification data and also by license plate numbers, VINs and component vehicle part and type numbers. Information leading to the identification of the vehicle used in the World Trade Center bombing of 1993 was obtained through an NICB database that allows the user to enter a partial VIN. The complete VIN was reconstructed and matched to a van stolen from a truck rental company on the day of the bombing. The search service (VINCheck) is available to the public.

In the 1980's states and regions experiencing high auto thefts began to form Anti-Car Theft (ACT) groups funded by grants from coalitions of law enforcement groups, state funds, insurers and consumers to promote public awareness of vehicle theft and lobby for the passage of state legislation aimed at combating thefts. By the end of 2014, 14 states had created Automobile Theft Prevention Authorities (ATPAs), mostly funded by surcharges on auto insurance policies. Michigan pioneered the ATPA concept in 1986, allocating $1 from each auto insurance policy to combating auto theft. Michigan's program, called Help Eliminate Auto Theft (HEAT) includes a hotline for residents to report thefts and chop shop operations. From 1985 to 2010 information forwarded to HEAT resulted in the recovery of more than 4,200 vehicles, valued at more than $51 million, and has led to the arrest of almost 3,400 suspects. ATPAs and other state entities such as ACT groups use a wide range of programs to fight auto theft. Combat Auto Theft (CAT) programs involve auto owners who voluntarily put stickers on their windshields that alert police that they can stop the car for a theft check after a certain hour.

Component Theft: More than 75,000 airbags are stolen every year, according to estimates by the Insurance Information Institute. NICB says that airbag theft costs insurers and vehicle owners more than $50 million a year. New airbags cost about $1,000 from a car dealer; on the black market the cost is between $50 and $200. To thwart thieves, steering wheel covers used with a steel bar steering wheel lock are available. New York combats airbag theft by requiring accident reports to note airbag deployment, and specifies procedures for auto repair shops to follow when replacing stolen or deployed airbags. Xenon headlights and global positioning systems (GPS) are also popular with thieves. By mid-2008, insurers and the NICB had observed a growing nationwide trend in the theft of catalytic converters. These components contain small amounts of platinum and palladium, precious metals whose value has risen with the use of catalytic converters and the growth in popularity of platinum jewelry.

Anti-theft Devices: Consumers spend hundreds of millions of dollars on vehicle security devices. Electronic tracking devices such as LoJack use a hidden transmitter to allow police to track the vehicle. (LoJack, which operates in 26 states and the District of Columbia claims a better-than 90 percent recovery rate.) These tracking devices not only help police find individual stolen vehicles but lead them to chop shops, thwart the export of stolen motor vehicles and lead to the recovery of expensive building construction vehicles as well as passenger cars. Some insurers offer their policyholders a LoJack tracking system at a discounted price along with premium discounts.

Insurer Discounts: According to the National Association of Insurance Commissioners, in nine states (Florida, Illinois, Kentucky, Louisiana, Massachusetts, Minnesota, New Mexico, Pennsylvania and Rhode Island) regulations require insurers to provide car owners with discounts on the base rates for comprehensive insurance for anti-theft devices. In four other states insurers may offer these discounts or are encouraged to offer them. The amount of the discount varies but is typically 15 to 20 percent for passive devices, which are automatically activated when the vehicle is locked. Massachusetts residents are eligible for a minimum 25 percent discount if they have both an anti-theft device and an auto recovery system, and some combinations of devices can result in a 36 percent discount. Insurance companies in states that do not mandate discounts, such as Georgia, New Jersey, New York and Washington, encourage car owners to install anti-theft devices by voluntarily providing discounts.

Vehicle theft continues to be large cost incurred by auto insurance companies. Throughout the years, law enforcement, insurance companies and anti-theft organizations, and the market have worked to combat vehicle-theft, bringing the rate down year-over-year. There is still a lot of work ahead, but with continued diligence, this will continue to be less an issue for the average consumer.

Want to know if you can save on home or auto insurance? See for yourself. Start a quote today.

Give us a Ring

Call today and speak with a professional insurance agent.

IronPoint Insurance Services is an independent insurance agency licensed (#0G87821) with the California Department of Insurance. We are authorized agents for many A+ rated Arizona, California and Utah insurance companies. We provide consumers with online, phone, and in-person insurance services through our insurance company relationships. IronPoint Insurance Services, LLC offers multiple insurance quotes to provide consumers several options for their insurance products. We offer auto insurance through Mercury Insurance Group, Travelers Insurance Companies, The Hartford, MetLife Auto & Home, and Progressive Drive Insurance. We are authorized insurance agents for these companies and do not charge any fees for our services. If an IronPoint insurance agent trys to charge you broker or agency service fees for representing these companies, please contact us immediately.